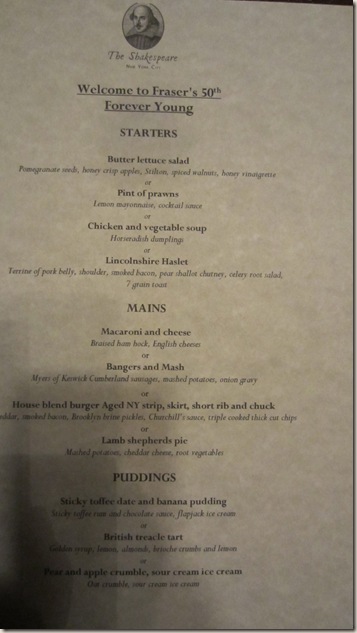 For those who like travelling to New York and like British inspired pub food, try “The Shakespeare”.  We attended this quaint British style relaxed pub which was the venue for my brother-in-laws 50th Birthday party with friends from all over from Jersey, London England and Canada.

The event was titled “Forever Young!” It certainly felt like you were in the UK rather than in the Big Apple.  This pub was modeled after the Stratford-upon-Avon decor of Shakespeare’s 16th century.  We were fortunate enough to sit with Yves Jadot one of the owners who was able to explain a bit about the pub, and the wines they provide.

There was some wonderful British type fare, such as scotch eggs, fish and chips, bangers and mash, sirloin burgers (not quite British!) and chips, all cooked to perfection and care.  Prices I understand were quite reasonable.

We managed to find a small boutique hotel to stay overnight.  The Kimpton at 70 Park Avenue was a minute away from the pub.

Stay tuned for my future blog on  Bill Cunningham.  Bill was the wacky photographer who had a regular article for the New York Times (“On the Street” and “Evening Hours”).  He died, age 106, taking a photograph, while riding his bike, on the same day we drove back.

Jane & Mala from Mosaic visit the Royal Ontario Museum to Experience the Middle Ages program.   A special program has been developed for Mosaic Members and those who attend our community events at ROM in March and also June 2014.   Voyage to far off lands and encounter characters, legends, costumes, and arts of different cultures from the Medieval Times.  For more information contact 905-597-7000 or review our website at www.mosaichomecare.com