Jane travelled to see her brother in Victoria for his fiftieth, recently, and came back with a shaggy dog story! 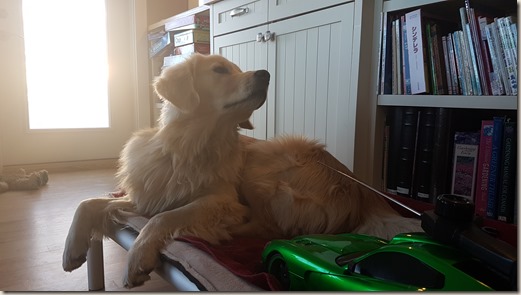 My dogs name is Dylan he is the mascot of Home Instead Senior Care in Victoria because my dad runs Home Instead Senior Care. Dylan is 20 months old he is a funny pup and very cuddly. Dylan likes to eat his food but also eats trash like paper towels and lots of other garbage he also likes to eat snow and when he does sometimes he gets a snow beard. ☺ And the other day I brought out my remote controlled car and he started barking his head off and biting it so I put it away. When I play with Dylan it is usually fetch and sometimes he doesn’t bring the ball back so I have to go and get it but sometimes he brings it and then I start petting him♥.