Have you ever bet on a silent auction?  And if you have not, have you ever wondered how it turned out for those who placed the winning bid?  Well I can tell you! 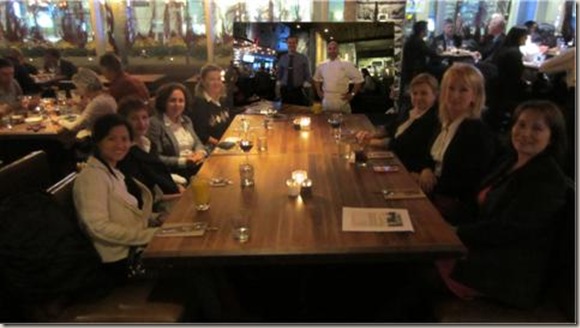 At a recent Toronto Ladies Golf Club event (fund raiser for Sheena’s Place) Nathalie and I bid on a “Group meal” at the upbeat and lively Earls Kitchen + Bar at 150 King Street West.

By the time we arrived, King Street was oddly deserted of its bankers and investment professionals.  As we passed through the doors of the restaurant and beyond, Bev Crescenzi and I were ushered in by the modern, stylised ambience of teak wood, clean lines and plants (an almost Asian fuzian influence).  It is the type of type of feel you would get in a good New York/west coast restaurant.

The evening started with an introduction from Ibrahim Tams, the Head Chef and Samuel Prentice the Assistant General Manager.  We very much appreciated the special service we were receiving, but I felt that it was also very much part of the overall flow and atmosphere of the restaurant.  I would also like to make a special mention of our two servers, Kelsey and Jillian, who very professionally catered to the Mosaic team.

Ibrahim gave us a sumptuous description of each of our five courses, each of which was infused with tastes  from different parts of the world.

First off was as the appetizer, chicken tacos, with poached chicken, cilantro and a specially imported hot sauce.

Then, if I remember correctly, we had a course of country herb salad with organic beets and cheese + a few greens.

This was interspersed with a filling non course of dips of crab and egg plant with different types of bread.  At about this time a bottle of “Whatchamacallit Toscana Red 2010” was served.

Then came another dish of chicken cherry curry with jasmine rice and their famous sour dough bread (oh so fresh) – the sour dough apparently takes 7 days to make and seconds to consume.  For those able to take it, a light beer and/or a choice of a ginger drink accompanied the dish.

By now our stomachs were getting rather full and we were slowing down.  To our surprise Abraham then introduced the main course: rare steak with a slight pepper corn sauce, grilled fresh salmon, brussell sprouts and black and white barley.  I never knew barley could be served like this! 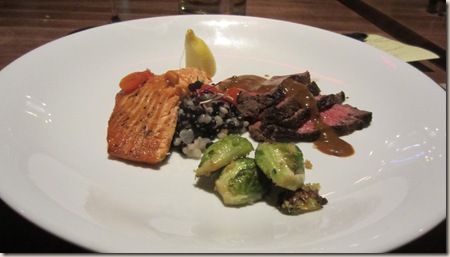 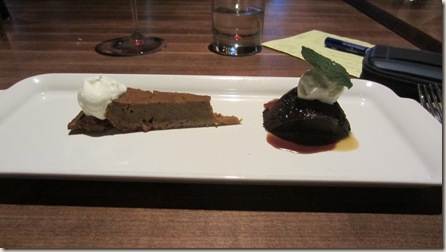 The Mosaic team had a wonderful and “full..filling” time together outside of the office.  What a fun way of connecting with your employees and supporting a good cause.

I would highly recommend this upbeat, eclectic, fun restaurant!!  Thank you again to Earl’s Kitchen + Bar.