The trip involved learning about the history of the Gibson family, their home and how people lived in the 19th century.

Of course the group had hands on experience on the tour making tasty butter and scones in the 19th century tradition!

Mosaic’s field trip to the Gibson House helped the community to understand the history of York Region and just how far we have come since the house was built in the middle of the 19th century.

This March, Mosaic is encouraging the community to explore our wonderful city of Toronto by organizing outings with friends and families to local museums. With the winter weather coming to an end, March is the perfect time to get out and about and ready for the warm months that await! 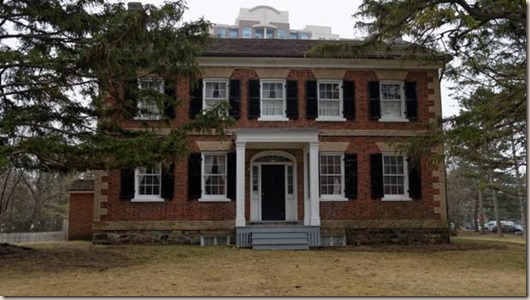 The entrance to the historic Gibson House Museum.

The tour of the Gibson House began in the kitchen.

Our first tour guide gathered us around the large wooden kitchen table and told us about the importance of the kitchen in the 19th recounting the many chores that were necessary during that time to keep the house running. At the time management of the household was done by women. This would involve managing a number of different tasks often determined by the season.

In the kitchen itself we learned small facts like how brown sugar was the sugar of choice at the time since white sugar was expensive, how tea was often used multiple times before being thrown out. Not only did we learn facts about everyday life during the time but we also got first-hand experience!

While teaching us about how to manage a household and kitchen in the 19th century our group got our hands dirty. A few attendees took turns churning butter, a very tiring activity, while a few others helped to create tasty scones! All of this of course was done in the same way that would be done over 150 years ago.

Once we were done churning our butter and making our scones we left the kitchen and ventured into another part of the home: the parlor. 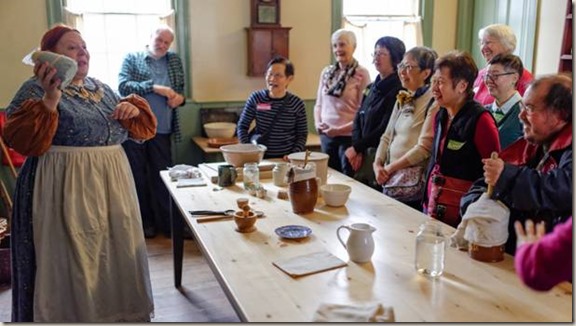 Our tour guide explains why white sugar was highly valued in the 19th century.

As we entered the parlor we were handed off to another tour guide where we learned about the history of the house, and the Gibson Family.

A Scottish immigrant, David Gibson was a surveyor and came to Canada in the 1820’s. David would later be banished from Canada for his actions in the Rebellion of 1837, he would later be pardoned in 1843.

The house was built in 1851 after David Gibson had returned to Toronto from the United States, after returning in 1848. In the parlor we also had the chance to learn more about the Gibson family which included photos of David Gibson and his family. Finally in the parlor we took a look at some of the fashion from that era. A few garments of clothing were passed around as our tour guide talked about the clothing, informing us how it was made, what it was made out of and the practical uses of the clothing for the time. After learning about the history of the house and the Gibson family we took a final walk through the upper level and through the dining room.