A belated post with pictures and commentary from “High Tea at The Ritz 2016 An Afternoon of Design, Dance and Festivities” that Kimberly Davies and I (Jane Teasdale)  attended on 3 April.

Supported by the Interior Design and Architectural Community, Canada Cares High Tea at The Ritz is a star-studded affair that brings together the who’s who in the Toronto design community. With a flare for what’s trending, unique, and of course, the latest take on all that’s gorgeous, High Tea at The Ritz is now in its fourth magnificent year. 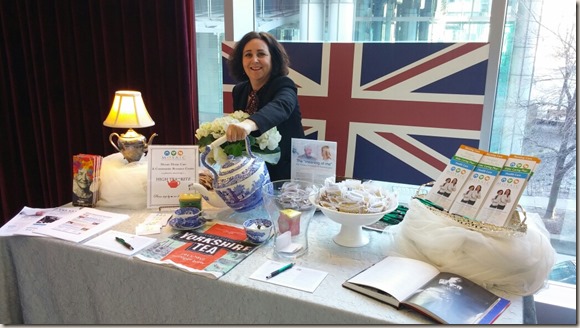 The day, a blustery cold winter’s day, could not have been different from the upcoming sunny weekend we have before us.

But what a lovely afternoon! So thank you to the organiser Canada Cares Canadian Abilities Foundation.

Mosaic Home Care Services and Community Resource Centres had an information table at this event (held at The Ritz Carlton Hotel in Downtown Toronto).

The Mosaic team worked hard in providing a wonderful display in keeping with the event “High Tea at The Ritz”. We had a large British Flag as a back-drop behind our booth, a large Spode Antique teapot with cups and saucers, a lovely light teapot which was the design of our own Kimberly Davies, sachets filled with Twining’s of London teabags and some candies as give-a-aways. We also had a wonderful book of British Greats displayed on our table featuring Teatime in Britain (Jane Pettigrew). We also provided our Mosaic Home Care Information and resources for those individuals who are caring for a loved one needing additional care and support.

David Carter took the stage and spoke he capitated the audience with his very British demur and London accent. David is a London based interior designer who works in high end residential projects both in the UK and abroad. He had mentioned to the audience that this was his first time visiting Toronto. He states in the program for the event “Tea at the Ritz” in the article about David Carter. Carter’s grand designs are driven by strong ideas and conviction that a successful interior should reach out and touch our emotions. By mixing glamour, luxury and wit with his uncompromising commitment to quality and sharp eye for detail, his work succeeds in doing just so.

David Carter also has a boutique hotel called the 40 Winks http://www.40winks.org/ which has been operating since 2009 and located in the east end (a very trendy area of London) that has been called “the most beautiful small hotel of the world” by German vogue while The Economist calls him “the worlds most extraordinary hotelier”.

His boutique hotel can only host three guests at a time making every stay seductive, memorable and enchanting according to the write-up in the Canada Cares High Tea at The Ritz programme for the event.

Apologies to Kimberly Davies whose photo seems to want to display itself upside down! 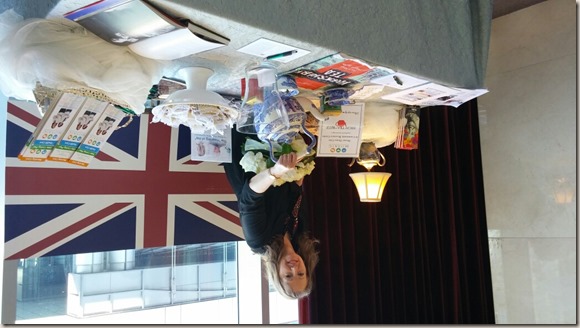