Hands off our gold

BIOPIRACY? Hands off our gold! 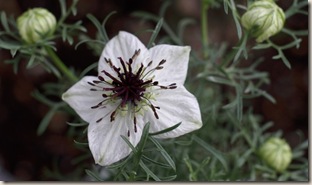 Gold, Egyptian gold, that is what Nestle, a corporate multinational, is trying to control contrary to international and national patent law.

This week a friend sent me an email link to a petition being organised to try to highlight this unethical, possibly illegal, action. Egyptian gold is one of the colloquial names given to Fennel Flower or to be more precise Nigella Sativa. A pretty flower, which has huge medicinal benefits, grown over a wide area of the Middle East. The use of this plant has been documented for over 10,000 years from around the Sumerian clay tablets, through to the Chinese and their 2000 year’s old documented pharmacopoeias, Egyptian Ebers Papyrus ( the Pharaohs medical manual ), Unani, Arab medieval medicine to its current use. In my practise for Cancer patients it is particularly helpful and has a wide range of therapeutic properties. “But instead of creating an artificial substitute, or fighting to make sure the remedy was widely available, Nestlé is attempting to create a Nigella sativa monopoly and gain the ability to sue anyone using it without Nestlé’s permission. Nestlé has filed patent applications — which are currently pending — around the world.” The link to the petition is here. The objective was 500,000 signatures and 494,000 plus have signed up. Please make it happen by signing up.

If any reader is a patent lawyer or knows one, please pass this information on, as Nestle has no right to patent a plant in law, including Canadian law and this should be stopped for all our health. Like well-known biopiracy cases before it, “Nestlé’s unashamed attempt to appropriate traditional knowledge reflects an ethical lapse and shows profound problems with the company’s intellectual property practices. It can be hoped that Nestlé’s claim will be turned down by patent authorities, but the fact that patent claims over traditional knowledge that preceded it have result in patents shows that intellectual property offices sometimes share industry’s disrespect for traditional knowledge.” And in many cases a civil servant is not a biochemist and has no concept of the consequences of such filing. “Indeed the fact that a corporation with the resources of Nestlé would pursue a patent on such an obviously pilfered “invention” at all is indicative of the need to improve patent review standards.” By adding of course a patented product with medicinal properties to food this company has avoided any form of license required for licensed drugs via clinical trials and does not have to demonstrate potential harms.

Nigella sativa is sometimes called Black Cumin and often found decorating middle eastern foods as small black dots with a slightly aniseed flavour. It is widely used in Indian cooking. As a Medicinal plant, there is good data on its key biochemicals and their actions on the human body. These include alkaloids, sterols, and flavonoids, oils which include thymoquinone, thymol, limonene, cavacrol and others. In fact one could say it has been exhaustively researched for its therapeutic properties. One of the most potent biochemicals present in this plant is Thymoquinone. It is a biochemical which is found in many plants where there is a significant anti- bacterial properties in the plant. Nigella sativa is a member of the plant family called Ranunculaceaes. This species contains some of the most toxic plants (and very effective from a medicinal herbalist point of view) but they are never used on a long term basis for precisely that reason.

The range of disorders it has been used to treat include cardiovascular disease, cancer, improvement of cognitive function, skin conditions, diabetes, damage arising from chemotherapy, allergies, and so on. Leaving aside the issue of inappropriate patenting, adding any form of medicine to food on an automatic basis has consequences including a potential reduction of the effectiveness of that medicine and a poorly developed immune system as bugs and viruses constantly mutate.

As we begin to approach early spring there seems to be a higher susceptibility to catching unpleasant viruses like Mono (Epstein Barr virus). This particular virus is very common among western populations and apart from initial antibiotics the conventional system can offer very little therapy. Herbalists have been treating this kind of virus effectively for years. Mono can trigger lymphomas, the papilloma viruses which are involved in skin cancers, Kaposi’s sarcoma found in HIV/AIDS, human herpes and hepatitis. In children there are reports of it bursting the spleen. Initially called the ‘kissing disease’ because of its association with cold sores and saliva; Mono is a virus infection which can be extremely debilitating. It alters the shape of the blood cell forever thus affecting respiration and the delivery of oxygen but also it triggers adverse effects in the spleen and immune system. Unless the patient receives immediate support following the first infection of Mono they may have years of poor health. A Medical Herbalist has many plants for this condition where the immediate focus is to control the likely proliferation of the virus via the lymphatic’s and spleen as well as support the liver where such pathogens are broken down for excretion by the body. Eccinachea spp. is a particularly helpful plant in this context but only in high doses and concentrations (not available over the counter). Eccinachea spp is an immunomodulatory plant which supports and develops the immune system with particular effect on the respiratory system. It has an interferon like effect on viruses without any of the side effects synthetic interferon drugs have. McGill University has done much ground breaking research with this plant. Another very effective Canadian plant is golden seal – Hydrastis canadensis but again at therapeutic doses not available over the counter. Golden Seal increases blood supply to the spleen and activates liver phagocytic function. The Epstein Barr virus has a lipid covering so it is essential to use plants which can break this lipid envelope. The berberines contained in plants like Golden seal are particularly useful in this context.

Egyptian Gold, Nigella sativa is traditionally used in respiratory diseases just as Eccinachea spp otherwise purple cone flower has been used for this purpose by our indigenous peoples. We have to protect both plants to provide good medicine for Canadians as plants constantly adapt their defence mechanisms against pathogens unlike us humans.

Morwenna Given BA MA BSC mOHA BHG AHG RH is a Medical Herbalist practising in downtown Toronto more information can be found at her website www.medicusherbis.com