After profiling activist and publisher Mary Ann Shadd Cary and singer Portia White in our Black History Month Profiles we move into the realm of politics with Lincoln Alexander. Lincoln overcame many racial challenges to become a successful politician. Being the first black member of the House of Commons, the first black cabinet minister and the first visible minority to serve in a vice-regal position as Ontario’s 24th Lieutenant Governor, Lincoln Alexander shared an incredible life serving the community and breaking barriers in the process. Let’s take a look at the life of Lincoln Alexander, the Politician.

Born on January 21st, 1922 in Toronto, Ontario Lincoln Alexander’s parents were immigrants. His mother was a maid, born in Jamaica and his father a railway porter hailing from St. Vincent, Lincoln would be raised in Canada until moving to New York as a 15 year-old teenager with his mother. Lincoln would move around New York, living in Harlem, Long Island and Brooklyn before returning to Toronto in 1939.

After returning to Canada, Lincoln would serve in the Royal Canadian Air Force during World War II, serving from 1942 to 1945. After the end of the war Lincoln pursued higher education, settling in Hamilton and studying history and political economics at McMaster University. Following his BA, Lincoln obtained a law degree at Osgood Hall Law School in Toronto, graduating in 1953. After completing his education he found it difficult to find a job, with many established law firms turning him away. Lincoln would eventually become a partner in the first interracial law firm in Canada, Duncan and Alexander. He would also become a partner at Miller, Tokiwa and Isaacs and in 1965 he would be appointed to Queen’s Counsel. It would in in 1965 that Lincoln would start his famed service in politics.

In 1965 Lincoln Alexander began his political career, running as Conservative MP for Hamilton West, but he would face defeat in that year’s election. Three years later in 1968, Lincoln Alexander would win the Hamilton West riding to become the first black Member of Parliament. Focusing on immigration reform and urban renewal Lincoln would hold his seat for 12 years, until 1980. In 1979 Lincoln would once again break new political ground when the newly elected government of Joe Clark appointed him Minister of Labour, becoming the first black cabinet minister in Canada. Only lasting 8 months as the government would be swept away in the winter of 1980, Lincoln would resign his seat in the House of Commons to become the Chairman of the Workman’s Compensation Board of Ontario.

After five years at the Workman’s Compensation Board of Ontario, Lincoln would once again break new political ground. September 20th, 1985, saw Lincoln Alexander sworn in as Ontario’s 24th Lieutenant-Governor, the first black Canadian to be appointed to a vice-regal position in Canada. Focusing on youth and education during his tenure Lincoln promoted education telling young Canadians to “Stay in school. Get an education.” Lincoln would serve as Lieutenant Governor until 1991.

After his life in politics Linolcn would serve five terms as chancellor to the University of Guelph. He would be appointed as Companion of the Order of Canada and to the Order of Ontario in 1992. He passed away on October 19th, 2012 at the age of 90.

Breaking ground as a politician for not only black Canadians but all visible minority Canadians is Lincoln Alexander’s legacy. Check in next week as we end our Black History Profiles with the fourth and final profile, looking at the baseball player Ferguson Jenkins, The Athlete. 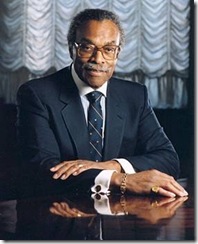