Kevin Lopes has prepared a number of black history profiles which I will be putting onto our blog over the next few days.

Black history month reminds us of a very important and still historically evolving human rights journey, and to appreciate it we need to remember the injustices of the past and the people that stood in the face of those injustices.

Every year in the U.S and Canada the month of February celebrates Black History Month in remembrance of important people and events that have shaped black history in each country. This year to celebrate Black History Month in Canada, I will be profiling 4 different black Canadians each week. We start with our first profile of Mary Ann Shadd Cary, a publisher, activist and journalist in the 19th century.

Born on October 9th, 1823 in Wilmington, Delaware, Mary Ann Shadd was the eldest of 13 children born into a free African-American family. Mary Ann’s parents were abolitionists who were part of the Underground Railroad helping escaped slaves find refuge in Free states and in Canada. Her father also worked for the abolitionist newspaper called Liberator. Mary Ann would later follow in the footsteps of her parents as a publisher and activist.

Educated in a Quaker school in Pennsylvania, Mary Ann would later start her own school for African American’s in 1840 teaching throughout the North Eastern United States. In 1950 when the Fugitive Slave Law passed in the U.S (allowing slave owners to recapture enslaved people in states where enslavement had been abolished) Mary Ann and her family would escape to Canada. The Shadd family would settle in Windsor, Ontario where Mary Ann opened a racially integrated school that was opened to all who could afford to attend (during the time education was not publicly provided). While teaching in Windsor, Mary Ann would also write educational booklets outlining the advantages of Canada for people wanting to move north. These booklets include A Plea for Emigration and Notes of Canada West written around 1852. The booklets would give way to Mary Ann publishing her own weekly newspaper in 1953 that would encourage freedom-seekers to find refuge in Canada making Mary Ann Shadd the first black woman in North America to publish a newspaper.

First printed on March 24th, 1853, The Provincial Freeman, was used to promote emigration to Canada and publicize the success of Black person’s living in freedom in Canada. Mary Ann wrote many of the articles herself and would often go back to the U.S to get information for the paper. Despite writing and editing The Provincial Freeman Shadd did not list her name or take credit for her work, instead having Samuel Ringgold Ward stand in as the apparent publisher. The paper was published in Windsor, Toronto and Chatham in the 1850’s before succumbing to financial pressure in 1860 and folding that year. While in Canada she would meet her husband Thomas F.Cary in Toronto which she had 2 children and also obtain Canadian citizenship. Mary Ann Shadd Cary would stay in Canada until 1863 and the outbreak of the Civil War in the United States, where she would return to her country of birth.

When the American Civil War broke out in 1863 Mary Ann Shadd Cary returned to the United States to help the Union Army in the war effort. Working as a recruiting officer in Indiana, Mary Ann encouraged African Americans to join the Union Army in fighting against the Confederacy and slavery. Following the Civil War, Mary Ann would move to Washington, DC, where she would continue her work as a teacher. During this time she also went to Howard University to study law, completely her degree in 1883 being one of the first black women to complete this degree in the United States. Mary Ann also fought to gain women’s suffrage and would become one of the first black women to vote in a national election. She would pass away in Washington D.C in 1893.

Mary Ann Shadd Cary fought for the freedom of black American’s and Canadians using her skills as a writer to spread the message of Canada as a safe-haven for black people in North America at the time. Come back next week as we profile the next person, Portia White, The Singer. 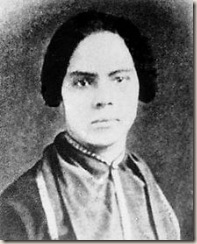