And to wind off our Kevin Lopes produced series on Black History Month….

After profiling Mary Ann Shadd Cary, Portia White and Lincoln Alexander we end of our Black History Month Profiles with a Ferguson Jenkins, the Athlete. An elite baseball pitcher in the 1960’s and 1970’s Jenkins was the first Canadian to be elected in Cooperstown, the Baseball Hall of Fame after a very successful 19-year career.

Born in Chatham Canada on December 13th 1943 Ferguson “Fergie” Jenkins would follow in the footsteps of his father; and ultimately surpass him. His father was an amateur boxer and semi-pro baseball player and Fergie was also a well-rounded athlete in his youth competing in ice hockey, baseball, basketball and track and field. While in high school Philadelphia Phillies scout Gene Dziadura would train Fergie and encouraged him to continue working.

Ferguson Jenkins would sign his first Major League contract in 1962 with the Philadelphia Phillies. His first three-and-a-half years as a pro were spent honing his skills in the minor leagues. It was in 1965 where he made his major league debut, pitching in relief. The following year in 1966 he was traded to the Chicago Cubs where his career took off.

It was at the Chicago Cubs where Fergie established himself as a dominant pitcher. Starting in 1967 he began a six-year streak winning 20 or more games a season, ending his career with seven. In 1971 he was the first Cub to win the National League Cy Young Award being the best pitcher in the National League. During his stint with the Cubs he won the Canadian Press Male Athlete of the Year in 1967, 1968, 1971 and 1974, and an All-Star in 1967, 1971 and 1972. Fergie became famous for his power, durability and consistency as a pitcher and his desire to compete. He would stay at the Chicago Cubs until 1973. That season he had an off-season which lead to Chicago trading him to the Texas Rangers in 1974.

After having an off-season in 1973 and being traded, Fergie came back with a vengeance in 1974 with the Texas Rangers. That year Ferguson Jenkins won a career-high 25 games, a franchise record at Texas. That season he also won the American League’s Comeback Pitcher of the Year, and the Lou Marsh Trophy as Canada’s top athlete. He would stay another year at Texas before moving to the Boston Red Sox, and returning to both Texas and Chicago before ending his career in 1983.

Ferguson “Fergie” Jenkins, a black Canadian, dominated the American sport of baseball during his career. His raw athleticism and hard-working attitude brought him his success in the Major Leagues. As the final profile in our “Black History Month Profiles”, I hope that the lives of the people profiled helped to show the hardships that had to be overcome by black Canadians throughout Canadian history, but also at the same time highlight the contributions they made. Thank you for read, I hope you enjoyed looking back at the lives of these extraordinary people! 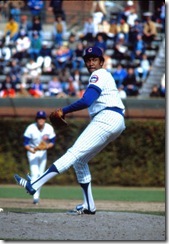